USTUR Assistant Professor, Maia Avtandilashvili, was interviewed by the Health Physics Society’s (HPS) Public Information Committee. Dr. Avtandilashvili is an integral part of the USTUR’s research team, which she joined in 2012, and has published many interesting papers on the biokinetics of actinides in the human body. Continue reading to learn more about Maia’s career, from her time working at Tbilisi State University’s Radiocarbon and Low-level Radioactivity Laboratory to her current work at the USTUR.

Dr. Maia Avtandilashvili is a nationally and an internationally recognized expert in radionuclide biokinetic modeling and internal dosimetry. Her research refines and validates the radiation dose assessment methods for actinide elements as the basis for reliable epidemiological studies, risk projection, and credible standards for radiological protection. Her expertise in biokinetic modeling is particularly critical to the field of health physics due to its importance to the assessment of internal radiation doses to workers and members of the general public.

Maia is a full member of the Health Physics Society (HPS) and a research assistant professor at the United States Transuranium and Uranium Registries (USTUR). Maia’s determination, resilience, and courage are inspirational—as she overcame many challenges while pursuing her dream to become a scientist.

Maia was born and raised in Tbilisi, the capital city of the Republic of Georgia, founded more than 15 centuries ago. She never had a doubt about who she wanted to be—a scientist—and later, when she started studying physics at school, a physicist. Maia was admitted to the physics department of Ivane Javakhishvili Tbilisi State University (TSU), the oldest and most respected higher-education institution in Georgia. In the third year, she chose to major in nuclear and particle physics and was offered a position of research assistant and, consequently, a graduate research project at TSU’s Radiocarbon and Low-level Radioactivity Laboratory (Radiocarbon Lab).

Maia graduated from TSU with a diploma (equivalent to an MS degree) with honors and continued working at TSU’s Radiocarbon Lab as a researcher. However, the huge political and economic changes due to disintegration of the Soviet Union drastically shifted the funding opportunities and priorities for science in Georgia. As a result, the funding for Maia’s graduate research was discontinued. However, she never quit pursuing her dream.

In the 1990s, TSU’s Radiocarbon Lab became involved in research projects to study the effects of the Chernobyl accident on the environment. Between 1997 and 2002, Maia participated in the International Atomic Energy Agency’s (IAEA) regional project on radioactivity in the Black Sea marine environment. During this project, she was awarded an IAEA fellowship, designed specifically for her, for on-the-job training in environmental radioactivity measurements with several leading German research institutions (Institute for Radiation Protection, BfS, Berlin; Institute for Radiation Hygiene, BfS, Munich; Institute for Chemical Research, Freiburg; Institute for Hydrology, BfG, Koblenz; and Institute for Fishery Ecology, BFAFi, Hamburg). The most exciting part of her training was a research cruise on the North and Baltic Seas to collect the sediment and biological samples for radioactivity measurements.

In 2001, TSU’s Radiocarbon Lab established a long-term collaboration with the Health Physics Program at Idaho State University (ISU), and in 2006, Maia was offered a scholarship to pursue a PhD degree in health physics at ISU. Maia will always be grateful to Professor Rich Brey, who offered her this excellent opportunity to advance her career. While obtaining her PhD, she met Dr. Anthony (Tony) C. James, the USTUR director at that time, who became her PhD advisor and mentor. He interested her in internal dosimetry and the biokinetics of actinides. He was instrumental for Maia’s research in that she used the unique data from the USTUR to study long-term plutonium retention in the human respiratory tract. Sadly, Tony passed away just a few months prior to Maia’s PhD defense in 2011.

While at ISU, Maia was awarded the HPS Burton Moyer Fellowship for graduate studies. In addition, she received several HPS student travel grants that gave her an opportunity to attend the HPS annual meetings, present her research, and meet fellow health physicists. Maia is an active member of the HPS, as she is cofounder of the Georgian Health Physics Association (GHPA), an HPS chapter since 2007, and was a Program Committee member of the Columbia Chapter of the Health Physics Society (CCHPS) from 2017 to 2019.

After graduation from ISU, Maia joined the USTUR research team in Richland, Washington. The USTUR is the only tissue repository in the world that collects and preserves post-mortem tissue samples from workers in the US nuclear weapons complex. Maia is one of very few scientists with the knowledge, training, and skills required to maintain and evaluate this irreplaceable collection of samples required for further research on the effects of incorporated radioactive material. Maia’s research focuses on modeling of actinide biokinetics using this unique human data from former nuclear workers with accidental internal depositions of actinide elements. She is also responsible for management and population of the USTUR health physics database and has mentored graduate students and a postdoctoral researcher at the USTUR.

Maia’s work in the area of biokinetic modeling of actinide elements in humans has gained wide recognition among the international research community. She has been involved in international collaborative research projects with scientists from Karlsruhe Institute of Technology (Germany) and Public Health England (UK). In 2017, Maia was invited to become an associate member of the European Radiation Dosimetry Group (EURADOS) Working Group 7 on “Internal Dosimetry.”

Maia is actively involved as a subject-matter expert in the Million Person Study (MPS), the largest epidemiologic study of radiation exposure designed to evaluate radiation risks among healthy American workers and veterans. She serves on NCRP Scientific Committee (SC) 6-12 on development of models for brain dosimetry for internally deposited radionuclides. Maia also serves as an Editorial Board member of the journal Austin Biometrics and Biostatistics and as an ad hoc reviewer for several peer-reviewed journals, including Health Physics.

Maia has authored and coauthored numerous scientific articles in peer-reviewed journals including Health Physics, Radiation Protection Dosimetry, Journal of Radiological Protection, Radiation Research, Radiation and Environmental Biophysics, Radiocarbon, and various peer-reviewed abstracts in Health Physics. She has presented her research at numerous international and national conferences. Recently, she was an invited keynote speaker at the 12th International Conference on Health Effects of Incorporated Radionuclides, Fontenay-aux-Roses, France (2018), and was invited to give guest lectures on internal dosimetry and biokinetic modeling at Washington State University, Tri-Cities campus.

After almost 13 years of living in the United States on a nonresident status (starting with the student visa and, later, the H1-B work visa), Maia was granted permanent resident status in 2019. It was a challenging and exhausting experience to transition from a nonresident alien to a permanent resident status via the work-based immigration category. Maia’s immigration petition included reference letters from health physics experts from all around the world attesting to her expertise. Moreover, it included hundreds of pages showing evidence of her research’s value to the United States. Maia is grateful to everyone who supported her, especially Dr. Sergei Tolmachev, director of the USTUR. She is also thankful to the United States for recognizing her professional achievements and giving her the opportunity to pursue, permanently, an academic career in this great country.

We are fortunate to have such a brilliant member of the HPS and thank Maia for her scientific contributions and professional service to the health physics field! 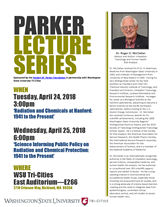 USTUR Scientific Advisory Committee chair, Roger McClellan, discussed the history of radiation and chemicals at Hanford and how science informs public policy during the Spring 2019 Herbert M. Parker Lecture Series. Dr. McClellan gave two lectures that were open to the public, and one that was open only to students. Dr. McClellan is an internationally recognized authority in the fields of inhalation toxicology, aerosol science and human health risk analysis. He is currently an adviser to public and private organizations on inhalation toxicology and human health risk issues. The Parker Lecture Series was sponsored by the Herbert M. Parker Foundation in partnership with WSU Tri-Cities.

The USTUR signed a memorandum of understanding with Kyushu Environmental Evaluation Association (KEEA) of Japan on May 16 at the WSU Tri-Cities campus in Richland, WA. This partnership will broaden the scope of USTUR research opportunities as the two institutions share knowledge and resources.

After 9 years of decreasing and flat funding, our annual funding was increased by 20%. In January, the USTUR submitted a 5-year grant renewal proposal for the period of April 1, 2017 to March 31, 2022. A budget of $5,500,000 was requested by the USTUR and approved by the Department of Energy, Office of Health and Safety (AU-10). Funding at this level will allow the USTUR to keep up the the increasing costs associated with autopsies and radiochemically analyzing tissue samples. It will also increase the USTUR’s visibility by allowing faculty members to present the Registries’ research at scientific meetings.

The USTUR’s director, Sergei Tolmachev, attended the International Commission on Radiological Protection’s (ICRP) 3rd International Symposium on the System of Radiological protection in Seoul, South Korea, October 20-22, 2015. This symposium was “an opportunity to hear about ICRP’s recommendations and work-in-progress directly from ICRP members, to have your views on this work heard, and to network with ICRP members and radiological protection colleagues from all parts of the world.”1 Topics included the science behind radiation doses, and new developments in understanding radiation effects. Between sessions, Dr. Tolmachev discussed plans for future collaborative research.

On April 5, 2015, Abel Gonzales (former member of ICRP Main Commission) and Ludwig Feinendegen (Professor Emeritus, Nuclear Medicine, Heinrich-Heine University Düsseldorf, Germany) visited the USTUR. Dr. Tolmachev provided a brief overview of the USTUR history, past and present achievements, and laboratory tour to the guests. Given the unique resources available at the Registries, Dr. Gonzales expressed surprise that the USTUR does not contribute to the United Nations Scientific Committee on the Effects of Atomic Radiation (UNSCEAR) activities related to the biological effects of uranium.

George Tabatadze began work as a research associate in radiation measurements on August 1st. Dr. Tabatadze earned his Ph.D. from Idaho State University in 2012. His research was conducted using data from a USTUR registrant donation. As such, he is well acquainted with the mission and operation of the Registries. He is enthusiastic about joining the USTUR research team, and we look forward to working with him.

Ms. Elena Burikova, the Head of the Radiochemistry Group at the Southern Urals Biophysics Institute (SUBI) in Ozyorsk, Russia, spent five days at the USTUR in July 2012. SUBI studies the effects of radiation in workers from the first Russian nuclear facility, Mayak PA. SUBI houses a radiobiological repository that is similar to the USTUR. The Russian Radiobiology Human Tissue Repository (RHTR) contains tissues from 922 deceased Mayak workers, and biological materials from living workers and non-occupationally exposed residents of Ozyorsk (e.g. blood and surgical specimens).1 SUBI’s radiochemistry group analyzes these human tissues to determine the quantity of actinides (such as plutonium and americium). END_OF_DOCUMENT_TOKEN_TO_BE_REPLACED